Topics of interest and lines of research

Topics of interest and lines of research

The automated Sanger sequencing based on capillary electrophoresis

ABI Prism 3100 Genetic Analyzer (Applied Biosystems, USA) is a fluorescence-based DNA-sequence analysis system utilizing the proven technology of capillary electrophoresis. The device has 16 capillaries operating in parallel; the length of each of them is 50 cm. It is used 96-well plate format. For 2,5 hours (time of a full run) 16 DNA samples are sequenced with 650 bp of an average length of reads. The total output of system is 144 samples per day.

ABI Prism 3730XL DNA Analyzer (Applied Biosystems, USA) is a fluorescence-based DNA-sequence analysis system utilizing the proven technology of capillary electrophoresis. The device has 96 capillaries operating in parallel; the length of each of them is 50 cm. It is used both 96- and 384-well microtiter plate formats. The constant presence of the operator is not required for working the device. For 2,5 hours (time of a full run) 96 DNA samples are sequenced with 850 bp of an average length of reads. The total output of system is 864 samples per day.

The automated Sanger sequencing based on capillary electrophoresis; sample preparation

The robotic Colony picker QPix2 (Genetix, Great Britain) is automated system to pick up cell colonies or viral plaques from solid nutrient medium into both 96- and 384-well plates or into other special device. The usage special software allows you to carry out the directional selection colonies with the certain parameters including size, color and shape. Replaceable adapters with needles for 96- or 348-well formats are applied for picking up. QPix2 is indispensable system for the preparation classical genome libraries and the following Sanger sequencing analysis based on capillary electrophoresis. 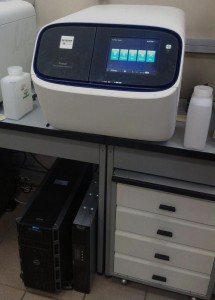 The manufacturer has a lot of variants of sample preparation that allows you to use Ion Torrent sequencers for bacterial genome resequencing and de novo sequencing, metagenomic sequencing, exome sequencing, transcriptome analysis and epigenetic studies with high efficiency. 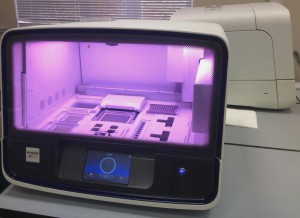 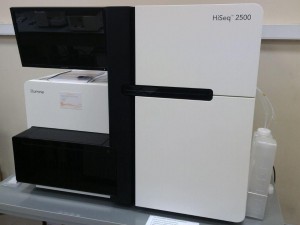 HiSeq 2500 (Illumina, USA) is a platform for next-generation sequencing utilizing sequencing-by-synthesis (SBS) approach. SBS technology is a reversible terminator-based method that detects single bases as they are incorporated into DNA strands growing on special glass substrate. Two independent flow cells with distinct operation modes provide scalability and flexibility: HiSeq 2500 througput is from 20 to 900 billions b.p. per run with read lenght from 40 to 250 b.p. Rapid-run mode provides quick results, efficient processing of a limited number of samples, and longer paired-end 150 base pair reads, which allow greater depth of coverage and improved assembly for de novo applications. High-output mode is perfect for larger studies with more samples or when the greatest depth of coverage is required. HiSeq 520 can be used for resequencing of procariotic and eucariotic genomes, bacterial genomes de novo sequencing, metagenomic sequencing, transcryptome analysis and epigenetic research.

High-density chips based on BeadArray technology

The robotic system TECAN Freedom Evo (Illumina, USA) is used to work with high-density biochips of Illumina. The device does not require a constant presence of men. It deposits the samples onto microarrays and carries out the following procedures with them in standalone mode. The duty cycle for handling of 24 biochips takes 4 hours.

The device iScan (Illumina, USA) is intended for scanning of high-density biochips, Illumina’s production, allowing to carry out screening studies in the field of transcriptomics , epigenetics , whole genome or locus genotyping. The instrument has a system of exciting dual-laser excitation with wavelengths 532 and 658 nm , and its scanning resolution is 540 nm. Automatic image analysis allows to receive data without delay for statistical processing.
The BeadArray technology is based on microscopic silicon beads deposited on the prepared glass surface. The size of beads is 3 mm and each of them has specific oligonucleotide probes. Modern biochip lines Infinium HD allow you to analyze simultaneously up to 5 million SNPs in 12 samples per one chip.

Spiroplasma melliferum is a bee pathogen which may be implicated in mass deaths of honey bees. The understanding of mechanisms underlying the interaction between spiroplasmas and host organisms, and identification of bacterial virulence factors are an important challenge. We succeeded in determining the partial genome sequence of S. melliferum KC3. As well, the annotation was carried out. This genome portion (1,260,174 bp) comprises 88 % of the whole genome size predicted from physical maps. We also obtained the S. melliferum KC3’s whole proteome. 521 proteins were identified. This is 44 % of the predicted ORFs. Finally, we reported, for the first time, the metabolome of this bacterium.

Sequencing data obtained were used to investigate mobile elements in the S. melliferum KC3’s genome. The mobile elements were shown to include (to contain) genes for phage proteins, for fragments or entire sequences of transposases, and for other proteins that are characteristic of the family of plectoviruses and are the virulence factors. It is noteworthy that such constructions have high potential for horizontal gene transfer.

in collaboration with ICG SB RAS.

Krotovaya Lyaga is a natural impoundment which attracts great interest of researchers due to abnormally high degradation of polluting biopolymers. We aimed to provide metagenomic analysis of microbial population colonizing the bottom. At first we were to develop a method for DNA extraction from sediment samples. Based on the analysis of the prepared DNA sample, we built a genomic library containing fragments of 2,000 bp. By now, 8,000 reads were obtained by Sanger sequencing based on capillary electrophoresis.

Our data were sent to IC&G of SD of RAS for further analysis. The genome of the sediment sample exhibited a great number and a great diversity of genes coding different enzymes of metabolic pathways for degradation of biopolymers and, among them, cellulases.

within the Russian metagenomic consortium(www.metagenome.ru)

Normal flora, or microbiota, in humans is of general biological significance. It is considered that intestinal microbiocenosis is a highly organized system that exhibits qualitative and quantitative shifts in response to the dynamic state of the body under different activity, health and disease conditions.
In the course of carrying out the project, the deep sequencing was conducted using the Applied Biosystems SOLiD™ 4 System genetic platform to explore more than 150 fecal samples collected from healthy individuals from different areas of the Russian Federation, including both large cities (Moscow, Saint Petersburg, Rostov-na-Donu, Saratov, Novosibirsk) and rural areas (the Omsk, Tyva, Khakassia and Tatarstan regions). Nucleotide sequences from each sample were mapped onto the known genomes of intestinal bacteria, and then the samples were compared against each other, through statistical methods, in both taxonomic units and functional gene groups. To check for distinctive features of the Russian metagenome composition in a global context, we performed a comparative analysis using existing data for adult population of Western Europe (Denmark, n = 85) and North America (USA, n = 137), and for native population of South America (Venezuela, n = 10) and Africa (Malawi, n = 5).

In whole, the results of our research correspond to those of analogous studies in America and Europe. 61of 86 microbial genera presented in the database were found at least in one of the studied samples.

The quantitative dominance was observed for members of the genera Prevotella, Bacteroides, Faecalibacterium, Roseburia, Lachnospiraceae, Coprococcus, Blautia, and Ruminococcus. Altogether they make up more than 80% of the total relative abundance in all the Russian samples.

At the same time, the Russian cohort is distinguished by the presence of unusual dominant microbial combinations, which were not earlier reported. These clusters include members of the genera Prevotella, Lachnospiraceae, Coprococcus, Faecalibacterium, Roseburia, Ruminococcus, and Bifidobacterium. Noteworthy is that these bacterial genera are found in inhabitants of outer rural areas, while they are not common to urban inhabitants, whose qualitative and quantitative composition of microbiota is similar with that in the population of Europe.

The similarity between the cluster samples varied depending on the choice of distance metric: the bacterial proportions were similar according to Spearman’s correlation (0.93±0.07, mean± SD), but the UniFrac distance between the samples was quite high (0.04±0.03). This dependence on the distance metric applied may be due to the substantial compositional similarity associated with significant differences at the quantitative level, this situation which is characteristic of family members as well as of closed populations.

in collaboration with IBC RAS

Noteworthy also is a decreased total level of gene expression in protoplasts (W = 64461020, p-value < 2.2e-16).  The results obtained for gene transcription in different tissues of the moss P. patens, together with the proteome and peptidome data, may be used to generate system models for the processes of peptide genesis.

DNA methylation is an important mechanism for regulating the genetic apparatus of cells in normal and pathological states. Using Human Methylation 450 biochip for the Illumina iScan Plus system, we examined the methylation status of 485577 DNA sites in 22 samples of rectal adenocarcinoma and 22 bioptates of the normal rectal epithelium from the same patients.

To generate the initial panel of candidate markers, we selected differentially methylated CpG sites that satisfied simultaneously the following three criteria: (1) a difference between the average methylation levels in the groups is greater than 40 % with FDR p-values < 0.05; (2) a variance of the methylation levels in the norm group is less 25 %; (3) the absence of overlapping of the extreme values of methylation in the compared groups (Information Gain = 1).

After the above described algorithm was applied, the preliminary panel included 14 CpG sites. The training of a classification model based on linear regression and the selection of additional attributes were performed on the initial panel with RapidMiner version 5.1. Three most informative methylation sites in the genes ADHFE1(cg01588438), COL4A1 (cg27546237) and C1orf70 (cg15487867) were  included in the final panel. The validation of the model was then performed on the methylation data presented by the Cancer Genome Atlas consortium, namely 247 samples including 205 samples of adenocarcinoma and 42 samples of normal tissue. The results of the independent validation test showed a diagnostic sensitivity of 98.09 % and a diagnostic specificity of 97.37 %. The fact of the association between the gene C1orf70 (cg15487867) and colorectal cancer was established for the first time. Such association for the genes ADHFE1(cg01588438) and COL4A1 (cg27546237) was reported earlier, but these genes were not analyzed as diagnostic candidate markers. The results obtained from the classification model, which were verified on the independent panel, suggest the diagnostic potential of the markers selected.